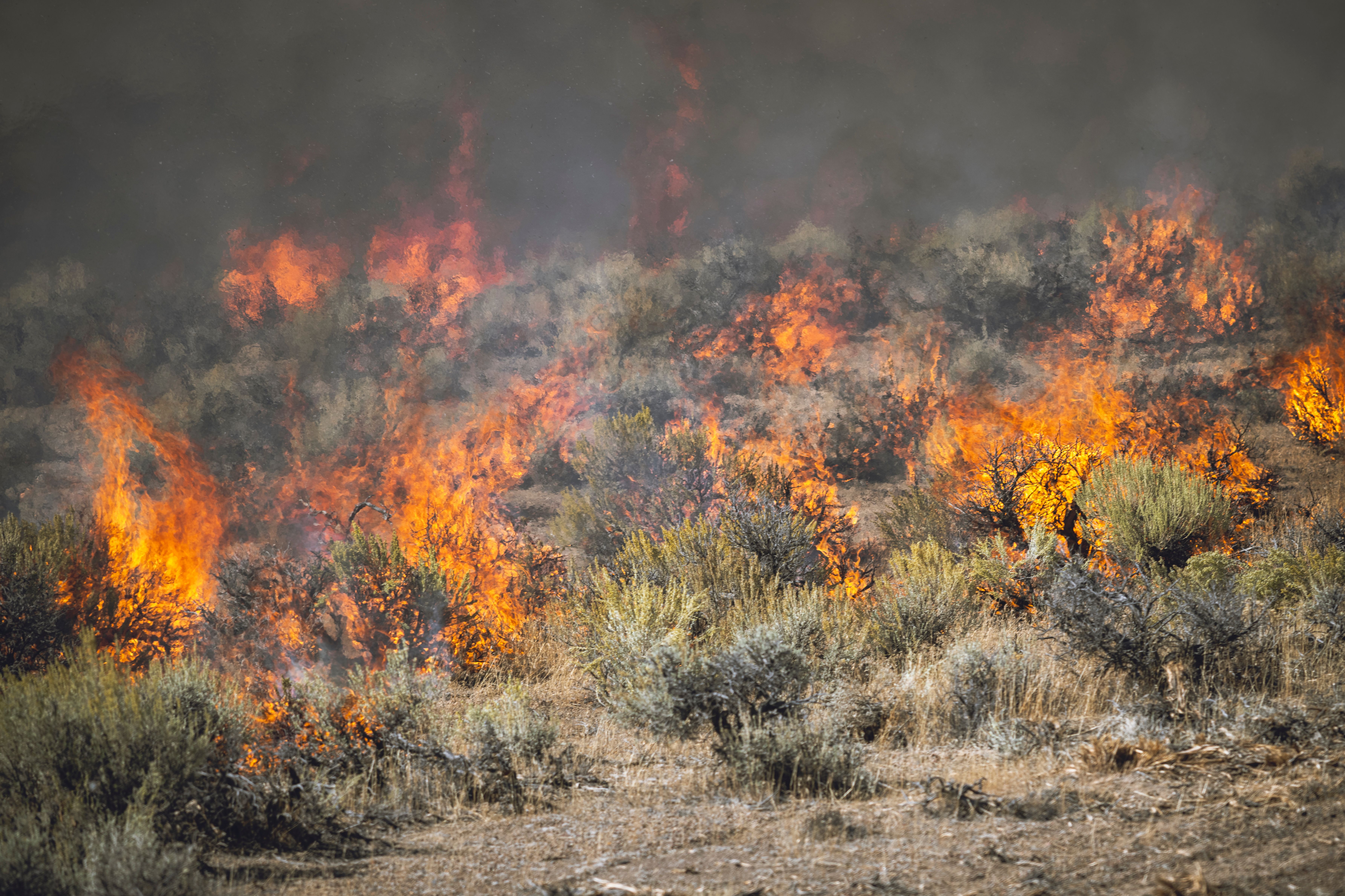 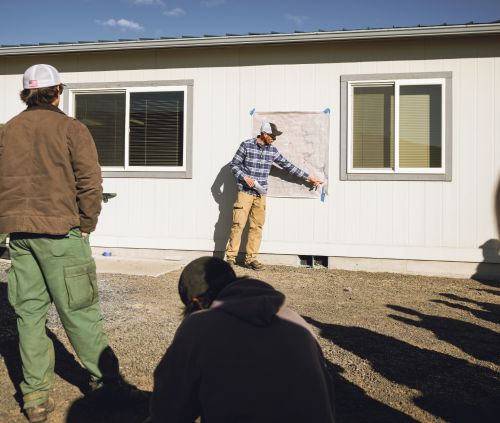 Chanel Sitz the Burn Boss Trainee giving the morning briefing at the BLM bunkhouse in Fields prior to beginning prescribed burning at the project area.

The Harney County Wildfire Collaborative began testing megafire prevention methods in September with a pilot project in a high fire risk area at the south end of the Pueblo Mountains.

Formed in 2014, the Harney County Wildfire Collaborative, a collaborative of the High Desert Partnership, has brought together representatives from county, federal and state agencies, local Rangeland Fire Protection Associations, the Burns Paiute Tribe, conservation groups, as well as scientists and ranchers to facilitate conversations around how to fight and prevent megafires in Harney County.

The group’s first major project is the National Environmental Policy Act approved Pueblo Mountain Pilot Project, which focuses on preventing a megafire in that area by creating a vegetated fuel break along a road corridor between Oregon End Table and Hawks Valley where firefighters can more safely operate and reduce the risks of a fire spreading northeast into the Pueblo Mountains.

The project, which is being implemented by the Bureau of Land Management (BLM), will replace invasive annual grasses with native bunch grasses in a portion of the test pilot area through prescribed burning that began September 2019, followed by spraying and seeding with native grasses. The project will eventually also improve fire detection methods by installing mountain-top cameras to reduce response time. Road improvements already completed will dramatically improve firefighting equipment access to the area.

Autumn Larkins, formerly an assistant district wildlife biologist with the Oregon Department of Fish and Wildlife in Hines, said that in addition to protecting an area where there is a high potential for ecological change, the collaborative also hopes to protect areas where there has been previous substantial restoration. Using prescribed burns in strategic areas and reseeding with native plants could “decrease the potential for a continual carpet of cheat grass in a pivotal location subject to lightning strikes and prevailing southwest winds, which if a fire started there, could burn hot enough to carry into the better habitat and create an unwanted megafire if given the wrong conditions,” Larkins said. 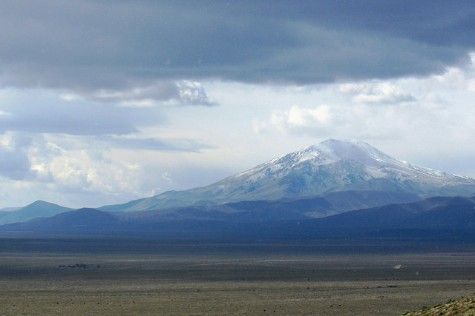 Three megafires in Harney County, the Miller Homestead and Holloway fires in 2012 and the Buzzard Complex Fire in 2014, prompted the collaborative to take a serious look at megafire prevention methods. The Pueblo Mountain Pilot Project will help test those methods.

Rodney Hoagland, a member of the local Rural Fire Protection Association in the Fields area and a member of the wildfire collaborative, has firsthand experience with those megafires and stressed the importance of future prevention in an area that has a lot of value to varying interests. “We picked the Pueblo Mountain area, the whole group did, because of the remoteness, the inaccessibility, and it had a lot of wildlife attributes and a lot of other things that kind of fit everybody’s program,” he said.

The Pueblo Mountains site was selected for a variety of reasons, including its importance for sage grouse and other wildlife, intact sagebrush steppe habitat, fire risk probability and accessibility. It is also part of a wilderness study area (WSA). “The Pueblos were selected because it represents the ‘best of the best’ in terms of intact fully functioning sagebrush habitat,” Larkins said.

Angela Sitz, a biologist with the United States Fish and Wildlife Service (USFWS) Bend office and a member of the wildfire collaborative, noted that because the test site is in a WSA, it means that certain conditions must be followed. For example, after the prescribed burning, which will rid the area of annual grasses that have become established in a portion of the test area, they will have to seed it with native plants. Sitz said that normally the Bureau of Land Management would probably choose to reseed with crested wheatgrass because it has a higher likelihood of success and a shorter restoration timeframe. However, because of the WSA restrictions, they will use native plants. “I’m excited to try site-specific native plants in an area we really haven’t done much with before,” she said.

Casey O’Connor, a fire planner with the BLM Burns District and a member of the wildfire collaborative, said that at least a third of the Burns district is labeled WSA, and historically, there has been minimal work done on those areas in terms of proactive fire management. “It’s a passive management slice of land, and those are some of the areas where we’re getting these big fires,” he said. “I want to see action taken to try and make these landscapes more resilient.” 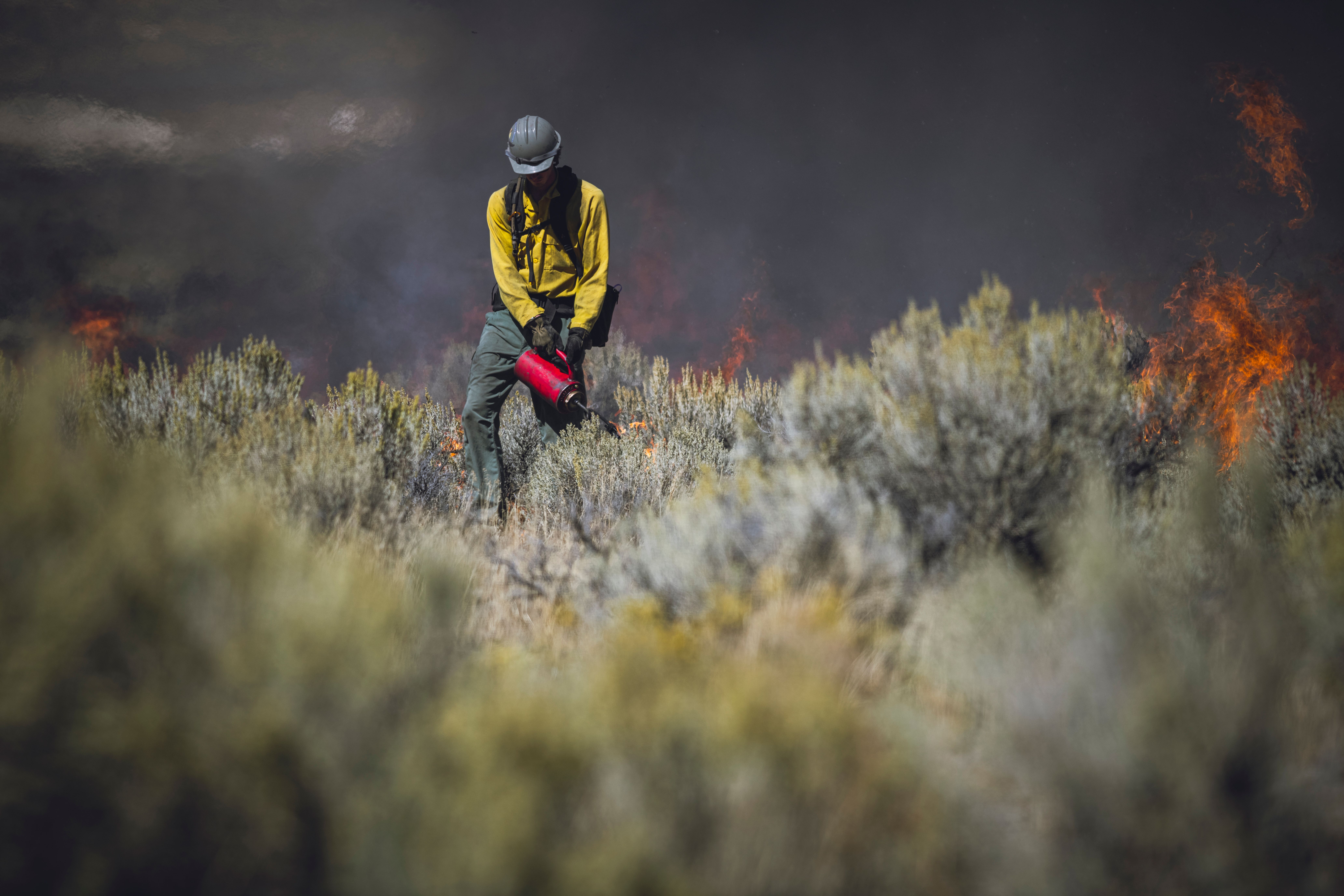 Burns Helitack member, Walter Riley blacklining the East side of of the burn unit.

In addition to using native plants because of the wilderness study area designation, the wildfire collaborative is also using prescribed burns on about 1,000 acres as a prevention and restoration tool. O’Connor said that the prescribed burns will be done on a lower portion of the site that was essentially a dying stand of sagebrush with an annual grass understory and few native plants. “We’ll use fire on that lower section to clean the slate,” he said. “We look at it as a restoration treatment to get the best odds for a successful seeding.”

Larkins added that the use of prescribed burns will decrease that fuel continuity and fuel moisture by replacing annual grasses with native perennial grasses.

The 1,000 acres that are being burned are part of an area where 25 percent or less of the sagebrush is in good condition. “We’ll burn it, then we’ll spray herbicide to hopefully give us a restoration window to prevent annual grasses from coming back in. The following year we will apply native seed,” Sitz said. In addition to prescribed burns, BLM will also mow the western portion of the treatment area to reduce fuel loads along the road while maintaining native vegetation.

Rhonda Karges, Associate District Manager with the Burns District BLM, and the author of the Environmental Assessment for the project, said the prescribed fire took place in late-September. 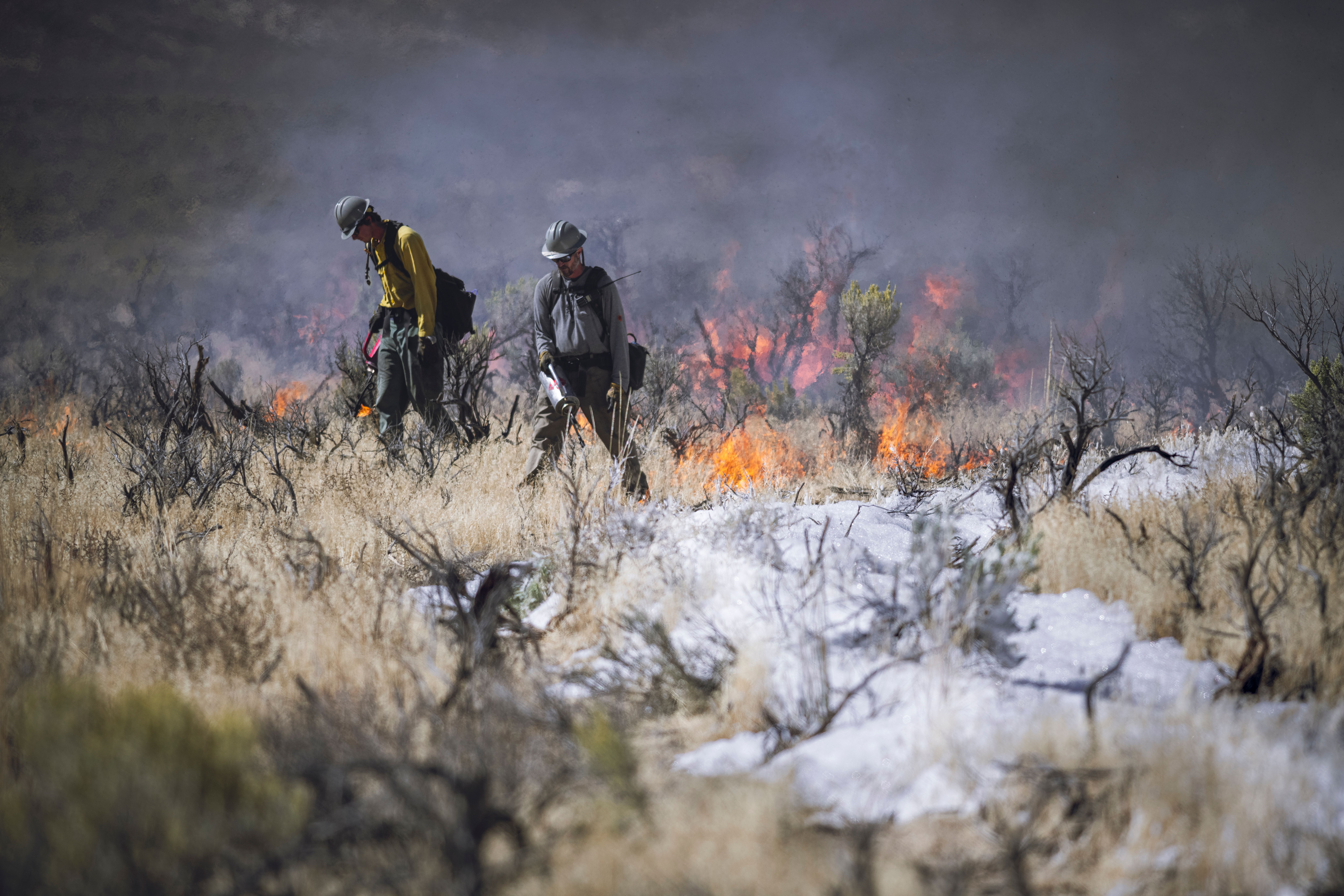 Walter Riley and Paul Weil from Burns Interagency Helitack lighting off a water/foam blanket around one of two archeological sites in the burn unit. The foam blanket smothers the fire by not allowing oxygen through while also coating and wetting the fuels.

Work along the upper portion of the road corridor will create a fuel break, so that in the event of a fire, firefighters can do their jobs safely. A fuel break can also serve to protect good habitat to the north of the project.

BLM fire planner O’Connor said that fuel breaks are one of his passions. “Fuel breaks give the suppression personnel somewhere that they can safely anchor in and take action on a fire,” he said.

O’Connor worked on both the Miller Homestead and Holloway fires and is familiar with landscapes and road systems that facilitate megafires. “If we have just a two-track road with sagebrush right up to the road, on a bad day, resources are not going to be able to safely engage that incident,” he said. “But if there’s some sort of break in the fuel that knocks the flame lengths down and gives them a safe area they can focus suppression efforts at, that puts us way ahead on being able to contain a site or incident even if it’s a megafire day where things are blowing up.”

The fuel break is important to RFPA member Hoagland as well. “Creating a fire break out there in an area that takes everybody a long time to get to in case of a fire, that’s probably the most important attribute,” he said of the pilot project.

Installing a fuel break is not without its detractors, however. O’Connor noted that while he advocates in favor of fuel breaks, there has been much discussion over how big to make the fuel break so as not to fragment the landscape. It’s also important to maintain visual resource qualities. On the Pueblo Project, a fuel break of 50 meters each side of the road was agreed upon through the collaborative group. O’Connor mentioned that bigger is always better from a suppression standpoint with fuel breaks, however, he understands the other concerns and stressed that the width of fuel breaks needs to be based on the site vegetation and the anticipated flame lengths and heat that a fuel bed is capable of producing under extreme conditions. 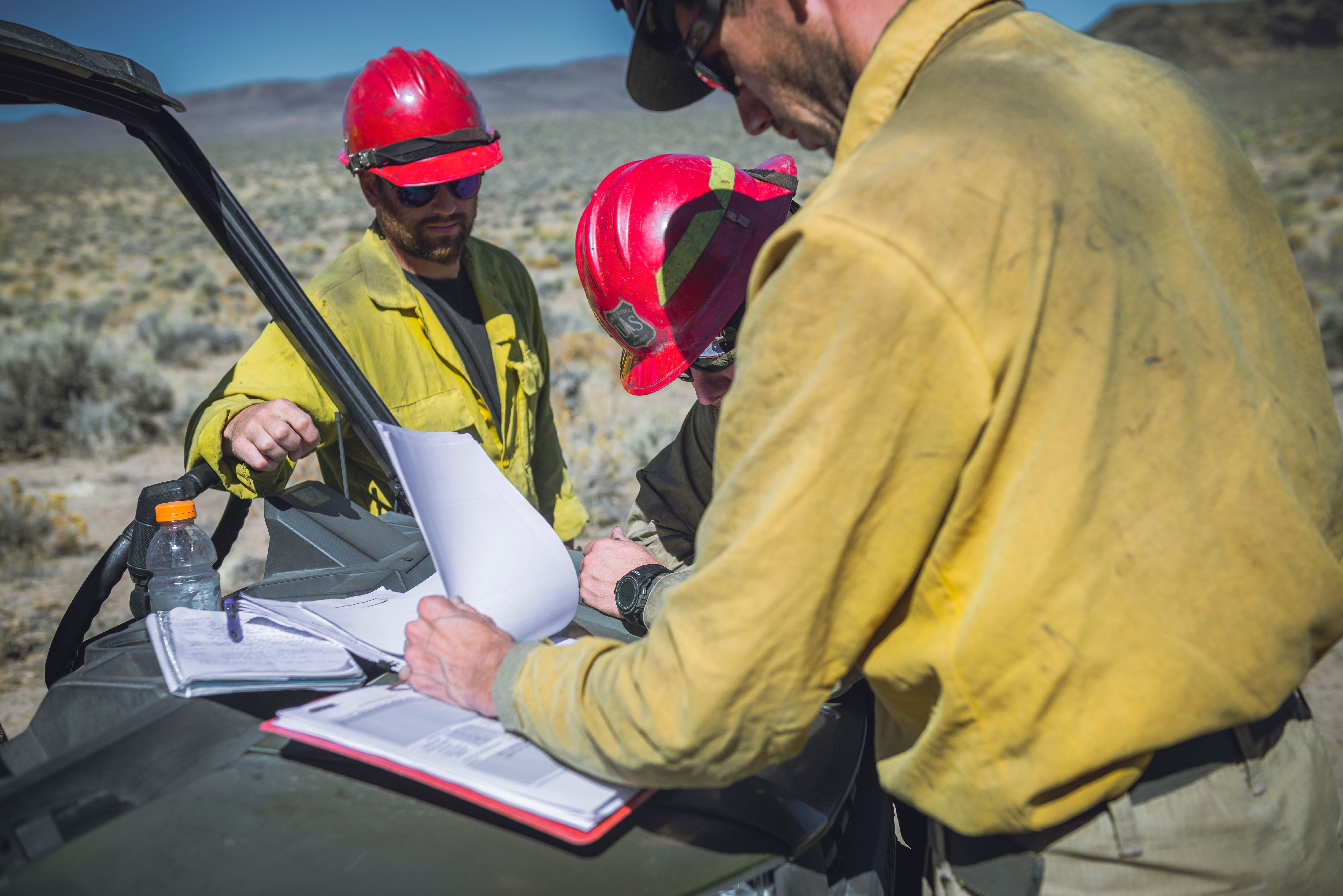 With so many people at the collaborative table, there are many goals and outcomes that individuals and agencies hope to achieve.

Larkins noted that ODFW is interested in safeguarding the intact sagebrush habitat to help protect and preserve the sage grouse breeding and brood rearing habitats. By improving the overall habitat, they also believe the project will positively impact big game species such as mule deer, antelope and bighorn sheep.

For Sitz with the USFWS, she believes there is a two-pronged goal of testing restoration efforts in low elevation degraded sagebrush habitat and to test the efficacy of fuel breaks. She said that a third goal would be to continue to engage in collaboration and long-term monitoring to ensure that the desired outcomes of the project are met.

O’Connor said that much of the value from the project comes from doing proactive work on the ground in a WSA; he sees it as a way to overcome inertia and start moving in the direction of proactive fuels treatments to prepare for fires rather than simply reacting to fires when they do occur.

Hoagland said the value of bringing so many different groups to the table through the collaborative process is immense, and that being able to do work in a wilderness study area that has never been done before is extremely important. “My eyes were opened big time because I thought these were things that could never happen, and they are happening,” he said. “What we’re doing right now may come up for view for the whole nation. It could set a guideline for everybody else.”

For Sitz, the collaborative process has already been successful, and she is optimistic that it will continue to be so in the future. “Collaboration is slow, but the pace is worth the reward because you build these long-term partnerships that allow you to engage in future projects,” she said.