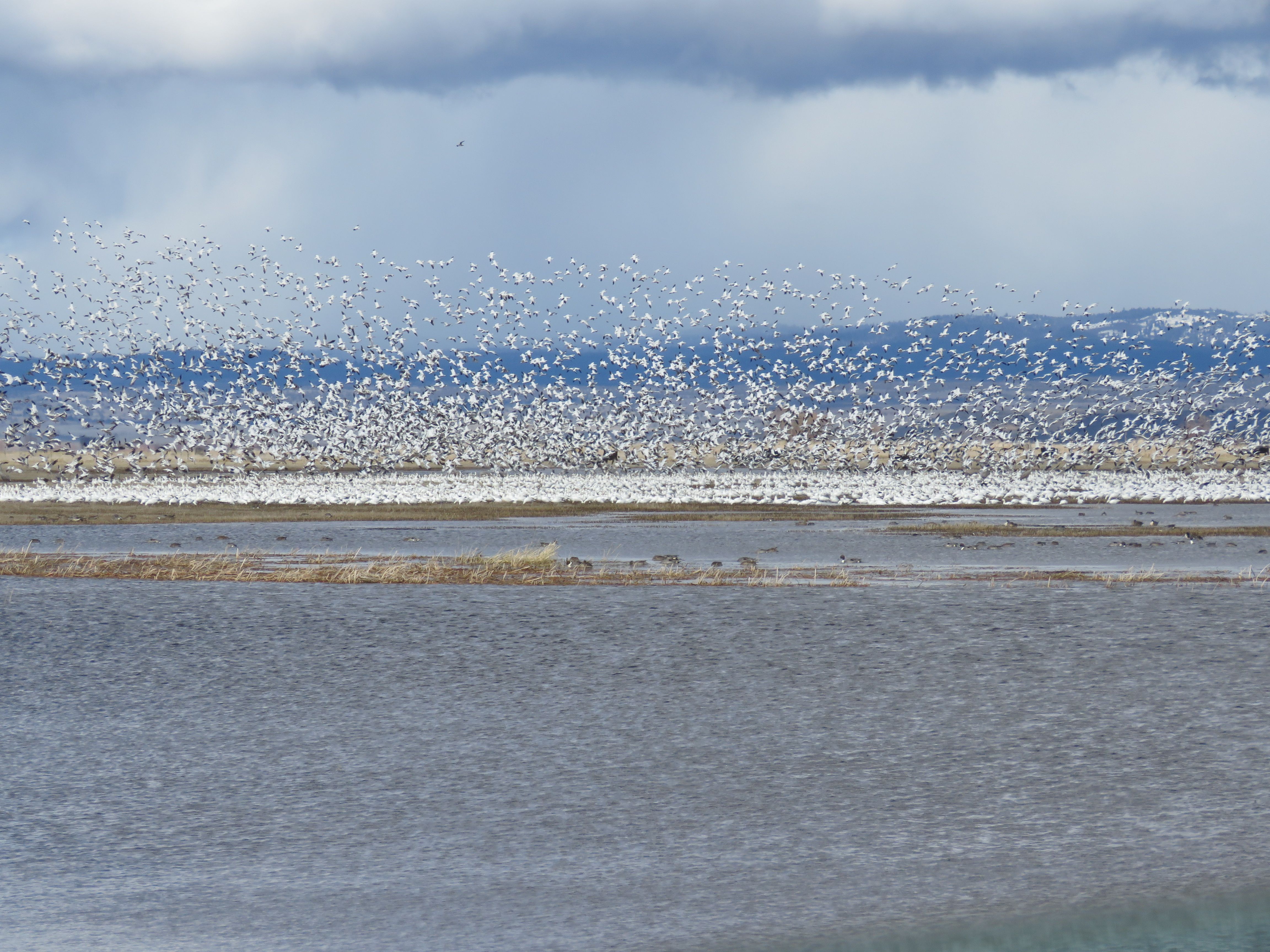 Ross's Geese in flight in the Harney Basin as photographed by Teresa Wicks, Eastern Oregon Field Coordinator with Portland Audubon. 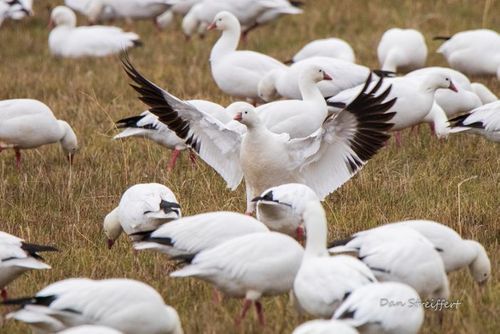 Ross's Geese in the Harney Basin photographed by Dan Streiffert, a volunteer with the Friends of the Malheur National Wildlife Refuge

While the annual John Scharff Migratory Bird Festival has been cancelled this year as a result of a statewide order to stay home and stop the spread of Covid-19, locals may still want to take up the solitary pursuit of bird watching as the spring show in the Harney Basin is a stunner.

Thousands and thousands of birds will pass through this area as they migrate up the Pacific Flyway to their nesting grounds in Canada. These include, among many others, Northern pintails, mallards, American wigeon, sandhill cranes, tundra swans and two different species of white geese. One of these species, the Ross’s goose, is notable in its journey. Often confused with a snow goose, the Ross’s goose is much smaller in size than a snow goose.

According to former Malheur National Wildlife Refuge biologist and current president of the Friends of the Malheur National Wildlife Refuge Gary Ivey, “They’re just a little bit bigger than a mallard but they weigh about 3 ½ pounds.” Snow geese have a black line (called a grin-patch) along the bill where the mouth would be and Ross’s geese don’t have that, he said. For those who’d like to tell the difference between the two white geese species, the Ross’s goose has a stubbier bill. “In the adults, it tends to get a little warty looking with a little purple cast to it, so they look different in the head profile, '' Ivey said.

A large number of Ross’s geese spend their winters in the Central Valley of California feeding on rice seeds. Around late winter, they begin their journey north and stop in the Harney Basin. The Harney Basin is a part of the Southern Oregon-Northern California, or SONEC, region as it is known to scientists and biologists who study bird migration. It’s also part of the Pacific Flyway, a massive bird highway that extends across North America from the Rocky Mountains to the west coast. Ross’s geese winter in the central U.S. and Northern Mexico as well.

The acronym SONEC wasn’t coined until about 20 years ago, according to Ed Contreras, a conservationist for the Intermountain West Joint Venture. “In the early 2000s, there was new science produced that demonstrated just how critical this region is and even this year, we’re learning more about wetland trends and bird use in this landscape and how meaningful it is for the Pacific Flyway in keeping the flyway intact,” he said. SONEC is really a hub or connection port between wintering bird habitat in the Central Valley of California and nesting habitat in Canada and the arctic. “More than 6 million wetland dependent migratory birds rely on the SONEC region and specifically seasonal wetlands and wet meadows. A lot of birds move into this landscape especially in the spring when there’s water on private and public lands,” he said. 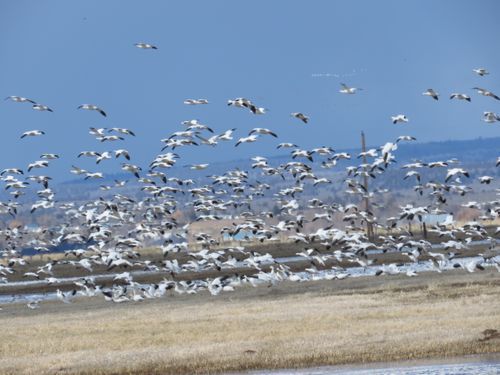 Ross's Geese in flight in the Harney Basin as photographed by Teresa Wicks, Eastern Oregon Field Coordinator with Portland Audubon.

In January, once they deplete the feed in their wintering locale, Ross’s geese start to head north, and the Harney Basin is a major stopover for them. Located in the eastern part of the Pacific Flyway, the Harney Basin’s wetland habitat is a key part of the Ross’s geese migratory journey. Teresa Wicks, East Oregon Field Coordinator for Portland Audubon who works full time in Harney County, noted that the geese will forage for green grasses in wetlands, meadows and agricultural fields located in the Silvies floodplain. “They also roost on lakes and reservoirs. The Silvies floodplain, because of the sewer lagoons in town, provides a really perfect place for them to both roost and feed, which I realize is probably a really unappealing behavior on their part,” she said with a laugh.

Dominic Bachman is the Aquatic Health Coordinator for the Harney Basin Wetlands Initiative, a High Desert Partnership collaborative, and he said that when the white geese first start arriving in the basin around the end of February, the landscape is usually fairly bleak. “It is brown. Everything’s frozen. It is kind of a scary place to be showing up,” he said. However, Malheur Lake is where spring starts to arrive first. “There will be some little areas of the wetlands that will open up and unbog around the lake,” he said. Swans, sandhill cranes and snow geese are usually the first to arrive and as it warms up, they will start to expand their reach out from the refuge. This is when the Ross’s geese start to arrive as well. Locals will begin to notice big flocks of white geese in the agricultural and flood-irrigated wet meadows closer to Burns, and by mid-March, the birds will have moved onto the sewer lagoons. Both snow geese and Ross’s geese are attracted to a “party,” said Bachman. “They feel very comfortable about landing where 5,000 other geese are, and so they are looking for the party. Then within that party, they’re hopscotching ahead of each other. They want to be where the best food is,” he said.

Wicks said that about 40 percent of the Pacific Flyway’s Ross’s geese population passes through the Harney Basin in the spring. “It’s pretty remarkable given that the Harney Basin isn’t that large, how many birds pass through or breed here,” she said. The fact that so many birds stop here is an indication of the high quality of forage in the basin.

Birds flying through the SONEC region are stopping in wetlands to refuel, and it can be a long flight between such places, Wicks added. Historically, the basin has been home to wetlands. “It’s possible that there are larger numbers of birds here now because of the agricultural fields but wetlands have always been a large part of the Harney Basin,” Wicks said. “As wetlands disappear throughout the flyway, places like the Harney Basin become increasingly important because the distance between wetlands increases as wetland habitat is lost.”

Ross’s geese return to the same areas year after year and as Ivey noted, they have their favorite places to stop during migration. “They know the landscape very well in their area. They go in California and then they have their favorite restaurants on the way back north and Burns is one of the main restaurants at which they stop and fatten up,” he said. The forage is necessary to turn fuel into energy for the journey but also to build up fat for egg laying when they return to the nesting grounds.

As they make their way north from the Harney Basin, Ross’s geese may stop at Mud Lake, Idaho, Freezeout Lake, Montana, and from there they will head to Alberta, Canada. Then, it is on to their nesting site in Nunavut, Canada, in the Queen Maud Gulf at the very top of Northern Canada. “They’re basically going to fly north until they hit a snow line where there’s no more green shoots growing, and they’re kind of stuck there,” Bachman said. Hopefully, at this point, they’ve fed well enough along the way so that they can lay eggs and raise their young.

The female Ross’s goose returns to the same nesting site, sometimes the exact same nesting bowl, where she was born. “The male and female defend this site, and it’s maybe a few square feet that they consider theirs,” Bachman said. Ross’s geese generally start breeding in their second or third year. They lay an average of four to six eggs. “The males don’t sit on the nest, but they do defend the nest territory, and they watch the nest while the female is on feeding forays. There’s a little more parental investment,” Bachman said. “They also tend to have much longer pair bonds.”

It takes about 10 days to lay a clutch of eggs and then another 28 days of incubation. The geese will spend 45 days protecting their brood before they can fledge and fly on their own.

Ross’s geese numbers have grown over the years, and Bachman estimates their numbers to be around 2.5 million currently. That has not always been so. He noted that in the early 1900s, their numbers were down around 5,000 to 6,000 as they were hunted for their feathers and as food. While hunts were limited, Bachman credits their surge in population to a change in diet. “As agriculture has changed in North America, it has changed what these birds do. Now they can basically sit around all winter long being fat sitting on a refuge, feeding at night in these great agricultural regions of North America including Texas, Louisiana and the Central Valley of California. They arrive much better conditioned when they come to the breeding grounds,” he said.

The feed the geese forage for in the Harney Basin as they populate the flood-irrigated wet meadows is also a major reason why they have had such nesting success in the arctic. The Harney Basin Wetlands Initiative, a collaborative of the High Desert Partnership, is working hard to bolster wet meadows on private lands and is also looking at ways to rehabilitate Malheur Lake so that it can support migratory birds in a more meaningful way. Contreras noted that the Harney Basin is especially important to sustaining waterfowl amidst a changing climate and growing human population in the West. “It’s one of the shining sub-basins in the SONEC region. It really is critical,” he said. “All the work that’s being done on private lands and public lands in this basin helps build resilience across SONEC and the flyway. I think the Harney Basin is really leading the way in being proactive, in the extent to which different partners are investing and making sure habitat is available into the future,” he said.